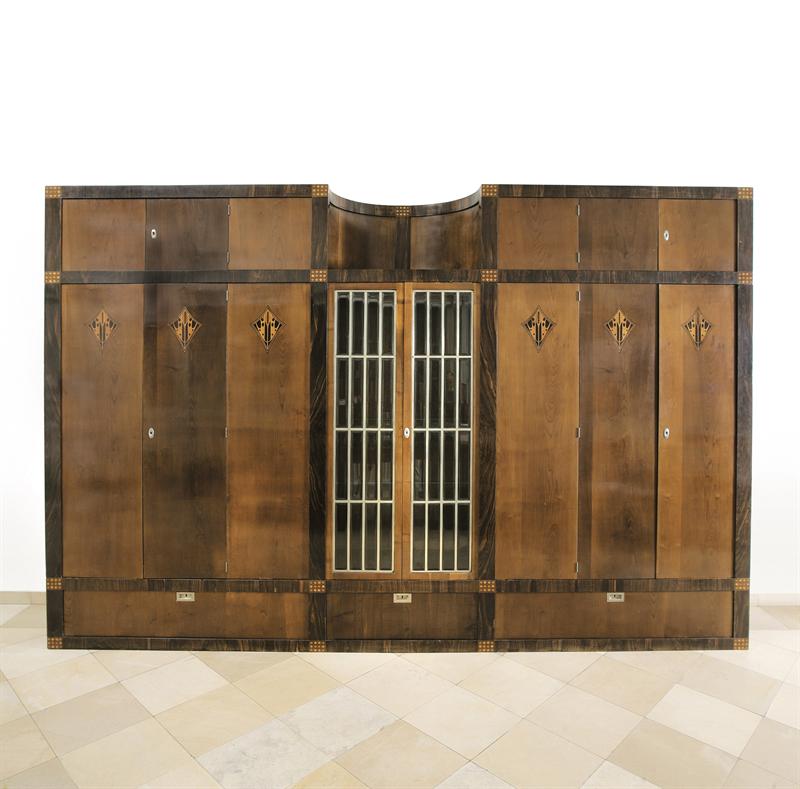 Cupboard from the apartment of Magda Mautner-Markhof

Original condition, professionally restored, some pieces of the inlay completed

The piece of furniture presented here stems from a bedroom that
Josef Hoffmann designed for Baroness Magda Mautner von Markhof
between 1902 and 1906 for her parents’ detached house or villa in
Landstraßer Hauptstraße, in Vienna’s Third District. This house, which
had been lived in since the early 1890s by her parents, the wealthy
brewer Baron Karl Ferdinand Mautner von Markhof and his wife Freiin
Editha Sunstenau von Schützenthal, became a magnet for the young
artists of the Vienna Secession in the following years. In 1906, the focal
points of the lives of three of the leading founding members of the
Vienna Secession were centered in or around the Mautner von Markhof
villa. Already in 1895 the painter Josef Engelhart had married Doris, one
of the three artistically gifted daughters of Baron Mautner von Markhof,
who had a house built in the neighboring Steinfeldgasse 15 as residence
and artist’s studio. Another daughter, Editha, married in 1905 the painter
Koloman Moser who was her teacher at the Vienna School of Applied
Arts and they moved into an apartment that had been installed in the
garden wing of the parents’ villa. Yet another founding member of the
Secession, the painter and set designer Alfred Roller, became better
acquainted with his student Mileva Stoisavljevic (whom he married
in 1906) in the Mautner von Markhof house. The couple rented an
apartment in the neighboring house at Landstraßer Hauptstraße 136.
Josef Hoffmann, Schlafzimmer der Wohnung Mautner-Markhof, Wien
Fotos aus: Innendekoration, Bd. XVI, Stuttgart und Darmstadt 1905, S. 182
Josef Hoffmann designed a dining room together with Koloman Moser
for Baroness Editha Mautner von Markhof in 1904.
Like the Wittgensteins and Waerndorfers, the Mautner-Markhofs were
representatives of a second generation of wealthy assimilated Jewish
Viennese bourgeoisie and exhibited a similar active interest in the artistic
achievements of the Vienna Secession. [...]
The artistic ideal of the “gesamtkunstwerk” (“total art work”) propagated
by the Secession was implemented by Josef Hoffmann in the rooms he
created for Magda Mautner von Markhof and from which the present
piece of furniture originates. In order to do so, Hoffmann subjected the
existing rooms to his own stringent architectural concept. This furniture
did not represent pieces that could be easily exchanged for others, but
rather were an integral part of a clearly conceived spatial experience.
This is particularly obvious in the case of the bedroom cupboard. With
its help Hoffmann could introduce a unified horizon, which amongst
other things was reflected in the height of the doors, the niche for the
gas fire and the frame for the bed hangings. Like the remaining free
wall areas over this horizon, it was composed as a field. In other words,
it echoed the spatial structure of the wall surfaces, which divided the
cupboard up in its individual functional elements and at the same time
turned the construction of the cupboard as a design element inside
out. The change of direction of the frame was emphasized with the aid
of rectangles in bright veneer. Hoffmann placed a symmetrical surface
ornament in the upper quarter of the individual door leaves that was
repeated in all other pieces of veneered furniture in the room. The
way in which Hoffmann introduced a spatial element by contrasting
the surface areas of the glazed doors in the centre of the cupboard
with the concave niche overhead was particularly sophisticated. This
reduced the massiveness of the piece and the long front of doors could
communicate with the space. [...]
The piece of furniture reveals Hoffmann at the height of his powers
during his reduced geometric creative period. Christian Witt-Dörring