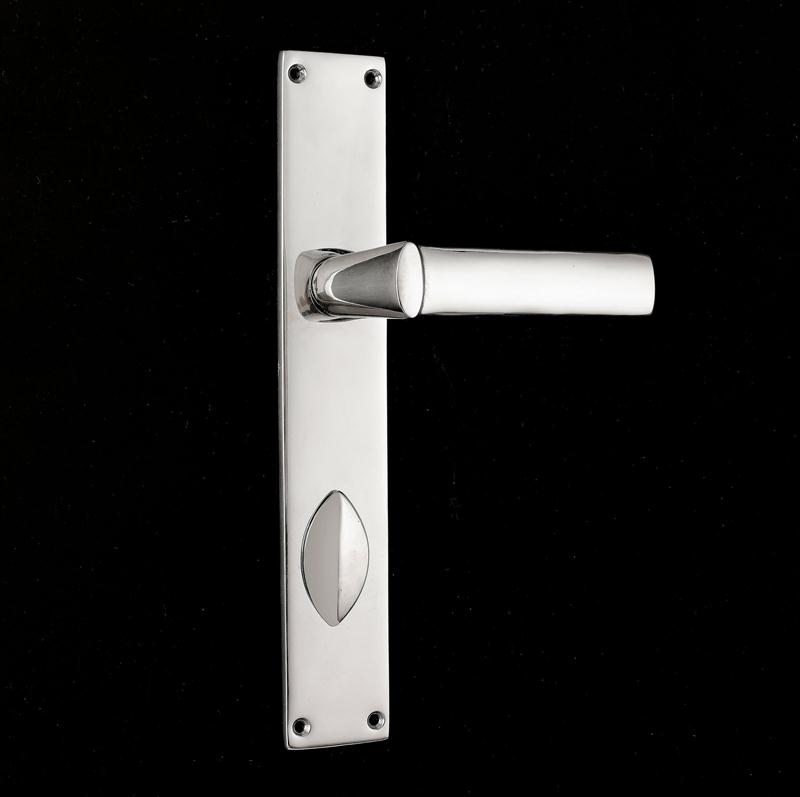 Such door handles can also be found in the house of Hoffmann’s birth in Pirnitz that is a Josef Hoffmann museum today.

During the reconstruction of the Villa Schießl along the lines of a
“gesamtkunstwerk”, Hans Ofner made use of individual accessories
that had been designed by his teacher Josef Hoffmann and which
were being produced at the time. These included printed fabrics
made by J. Backhausen and such fittings as coat hooks and door
handles manufactured by the Wiener Werkstätte. Hoffmann had
designed this model of a door handle around 1905. It was intended
especially for smaller doors, such as those Ofner was planning for
the Villa Schießl. Hoffmann had used this door handle for the house
of Alexander Brauner on Hohe Warte (1905-06), the Villa Prof
Pickler in Budapest (1909), and Hoffmann’s parental home in Pirnitz
(Brtnice) (1911). Hoffmann’s design stands out for its refined interplay
between rounded and straight – soft and angular – forms, which are
also typical of his set of cutlery for the Cabaret Fledermaus (1907),
generally known as the “Round Model”. Hoffmann rounded off the
edges of the rectangular handle plate. Instead of an oval, he used an
almond-shaped form for the keyhole cover and had its domed surface
converge at centre in a straight, vertical ridge. The individual elements
of the handle as such do not, as usual, fuse to form an L, but consist
of two separate parts meeting at a right angel. This clear, angular
construction, on the other hand, is softened by the oval cross-section
of the two construction elements. In this way, Hoffmann created a
clear and suspenseful design that is entirely consistent in its ambiguity.
Christian Witt-Dörring